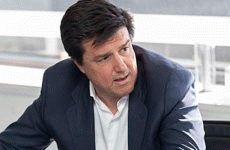 Almudena Díez | Ismael Clemente, CEO of Merlin Properties, ex­plains that “What we are seeing today is that the adop­tion rate of te­le­wor­king in Spain is very low. In fact, it is one of the lo­west, not only in Europe, but in the world. With the ex­cep­tion of the pu­blic ad­mi­nis­tra­tion, which has adopted it mas­si­vely, with the risk of ge­ne­ra­ting inef­fi­ciency”

Q: A Bankinter director told us that the value of real estate is not being reflected in the market because most of the shareholders are passive funds…

A: The financial sector, once it has organised itself into huge funds, is a sector that can move between countries, disposing of its capital wherever it pleases. And, ultimately, invest without recourse to human intelligence, only artificial intelligence. On the other hand, it lives on a lot of information and analysis that it does not always have time to digest. This sometimes makes it difficult to live with this type of investor.

And at other times, their behaviour is frustrating for the manager because you see them participate in a certain investment theme like an elephant in a china shop, but also leave it in the same noisy way… I think the problem we have today is the existence of opinion leaders, who create investment trends that many people follow, and there is an almost Olympian disregard for orders of magnitude. In fact, we have just experienced something like that these days, which unfortunately is very frequent.

Christine Lagarde announces that she is going to raise rates because her priority is to fight inflation. And as a result, the stock market takes a tumble and real estate shares across Europe have huge losses because people say: if interest rates go up, it’s bad for real estate. Well, actually, if inflation doesn’t offset it, it can be bad for net asset value. But if we’re already trading at a huge discount to net asset value, what difference does it make if that parameter goes down by 10%! Merlin is now trading at 9.40 and our NAV is 16.40 euros. Even if the net asset value falls by two euros, it will remain at 14.40.

And two euros in a company like Merlin is one billion euros of lost value in its asset portfolio. And honestly, when logistics is rising, when we have data centres that are adding value, when we have retail, which after having corrected a lot in recent years, is showing signs of recovery, when offices are a fairly stable asset, well, I don’t see how valuations can fall by these orders of magnitude. Even more so when capitalisable rents are rising?

Q: The Canadian fund Brookfield is taking listed real estate companies off the market. In six months it has bought three: the Irish company Hibernia, the German company Alstria and the Belgian company Befimmo.

A: The listed values do not reflect the value of the assets underneath. Someone can always come along who doesn’t care about the value of the share price but about the value of the assets, and by way of the share price take over those assets. This is starting to happen and I am afraid it is going to get worse. We know that there are many more people looking at this type of operation. Added to this is the fact that for many people listing has become hell. The regulations, the limitations on everything – including executive compensation – make many management teams wonder why they should be listed at all. One day, this will significantly limit the universe of companies eligible for exchange-traded funds themselves. But for the time being no one is paying attention.

Q: Covid19 has brought a lot of teleworking, I don’t know if it is here to stay. Is a property company, such as Merlin Properties, being affected a lot?

A: What we are seeing today is that the adoption rate of teleworking in Spain is very low. In fact, it is one of the lowest, not only in Europe, but in the world, with the exception of the public administration, which has adopted it massively, with the risk of generating inefficiency. It is what the Portuguese call “custos de contexto” and they have tried to reduce it after the unpleasant experience of the intervention: it cannot be that the Administration reduces its productivity because it is teleworking…. It cannot be that the number of public employees rises and at the same time the number of hours worked falls. In the private sector, teleworking has also been adopted at two extremes: in professions with very high added value but with highly productive employees without supervision – consulting – or in administrative or repetitive, highly automated and automatable jobs, such as call centres…. If before there were two hot-seat, on-site jobs, now there is one present and one at home. So call centres have indeed reduced space by half. Finally, a part of the technology sector has adopted it, with less added value, for example, programmers…

Q: Why do you think there is such a low rate of teleworking in Spain?

A: Three things. First, commuting times in Spain are very low. Madrid ranks 276th in the world on the Tom-Tom traffic congestion index. So, in Spain, adding commuting time to your working day is not a lot, whereas in New York it is. The second is that the cost of real estate in Spain is derisory compared to the total cost of an employee, around 4%. That is, if you divide the cost of the square metres used by an employee over his or her fixed and variable salary, it is around 4%. With these costs, CFOs are also not extraordinarily keen to remove positions and send employees to a remote relationship. They are more concerned about the loss of productivity than the savings they will achieve. Whereas in other cities in the world, where that ratio can be 40%, the CFO, in order to temporarily fix his bottom line, prefers to send a hundred employees home and save the space, and then if productivity is worse, let the next person fix it. And the third thing is that in Spain there is a labour market with a very high unemployment rate and people cannot or should not allow themselves too much fickleness, especially in the private sector. Because, in the end, the speed of progression of the on-site employee and the teleworking employee are completely different. Here they want to subvert the situation by bringing the trade unions into the equation, but that is the same as always, putting gates in the field, it doesn’t work. At most in former monopolies, with huge workforces and which function more like the government than the private sector.