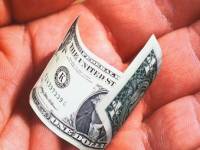 Inflation in US and EU.

It sounds like a helpful excuse for policymakers trying to walk away from their responsibility to cope with a problem they feel unable to tackle.

The truth is we are already plunging into second-round inflation fuelled by expectations. Enterprises discount future cost hikes by increasing their current sale prices, while workers fearing a significant fall in their real incomes push for higher wages. Both citizens and governments refuse to acknowledge the new economic outlook has impoverished them.

They keep running untenable levels of expenditure financed either through indebtedness or disinvesting savings bolstered during the pandemic. For, excess spending stands as the ultimate driving force behind inflation. Putin may have triggered the gun, but such a long and accelerated shot only stems from a robust demand ready to buy at ever-increasing prices.

Monetary policy across the Atlantic is rapidly moving to a restrictive stance. The US policymakers take the threat seriously, while their European counterparts prefer to ignore the dim prospects looming ahead. The European Central Bank still struggles to abandon its largely accommodative policy. As soon as it announced plans to to stop the asset purchase programme, fear that plummeting sovereigns of hugely indebted countries might lead to utter discomfiture in Italy and Spain forced the ECB to backpedal. Markets discount a meagre first round of a quarter-point rate increase this month. Meanwhile, the Federal Reserve will deliver another substantial hike, the fourth in a row, targeting a close to 4% level by the year-end. A telling difference between the Fed’s readiness to trim demand and the benign neglect displayed by the ECB.

Fiscal policy also reflects such a sharp contrast. While Janet Yellen in the US Treasury devotes extensive efforts to harness public expenditure, Brussels extends the free ride on deficits for an extra year. No wonder many European leaders bet on massive spending to relieve the side effects of rising prices. Some, like PM Sánchez in Spain, plan to increase both revenues and expenditure sharply, in an attempt to balance the public accounts. They ignore that rising spending, even coupled with corresponding higher taxes, inevitably leads to economic overheating.

Some believe the threat of potential recession in Europe justifies neglecting current inflation. They overlook that price hikes severely undermine and disrupt economic performance, increasing the risk of a downturn. Christine Lagarde rightly pointed out that rising rates will not bring down gas prices. Yet, that conclusion no longer holds when facing widespread inflation. As PM Sánchez’s stance suggests, keeping high expenditure and indebtedness stands as a dangerous gamble. Even if Brussels rubberstamps his policy, the markets may soon take a dim view on it.