Spain: The Government Has Too Many Bills Coming Due 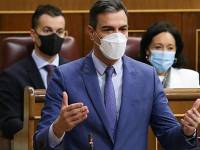 Fernando González Urbaneja | It is like a cre­di­tors’ mee­ting, which never comes at a good time. The go­vern­ment has too many bills co­ming due for which it is short of li­qui­dity, i.e. votes and par­lia­men­tary and so­cial sup­port. The weekly con­trol ses­sion in Congress de­mons­trated the lo­ne­li­ness and, above all, the fee­ling of in­com­prehen­sion, mental fa­tigue and sur­prise of a Prime Minister who is not short of sel­f-es­teem.

Nothing indicates that the government is going to fall, the partners know that maintaining it is the best of their alternatives, but the weakness is manifest. It would be bearable, as it has been until now, in periods of reasonable instability. However, the current one is not. It is rather of radical instability, in the face of which leadership, credibility and decisions must be offered. But this government is doing badly in all of these areas.

Last autumn, with the escalating price of gas and its impact on electricity through the wholesale pricing system, the government could have come up with an emergency plan to contain the CPI and its disruptive effects on consumer sentiment. It did not do so, nor did it even attempt to rectify the CPI calculation method which has added more than one artificial, biased and unrealistic point to the index.

The government failed to understand that the rise in the CPI in autumn required action and explanation. It dragged its feet on cutting taxation, a correct but belated and poorly explained measure. Nor was it sensitive to the impact of gas prices on both households and industry. The final straw came with the rise in the price of a barrel of oil and its impact on fuel prices. These are as sensitive or even more so than electricity for economic agents.

Since the government did not react to these price rises, hiding behind European regulation, it is now encountering social unrest that is expressed in strikes (or lockouts, it doesn’t matter) that are justified by social unrest. Strategic strikes that break the supply chain and complicate the day-to-day life of an angry citizenry.

The government is not to blame for everything that happens, but it ends up being responsible for becoming the target of all criticism for being insensitive or incompetent or lacking in diligence or bad luck. The president has too much self-esteem and too little sensitivity for the direction of public opinion.

The transport strikers have seen that they have the opportunity to “ask for everything” (as one of them said to the TV cameras), this is their moment. And the government only promises it will engage in dialogue to distribute, to subsidise (it is part of its way of understanding politics: spending) without exercising effective, moral, realistic leadership. The energy bill is not negotiable, nor is it elective; we must be able to share it out. But in order to do so, it is necessary to enjoy credibility, inspire confidence, to have outstanding bills in order. This government has not sorted them out, they are falling due every day and it has not managed to deal with them.

Now we must wait for this promising Tuesday 29 March when the council of ministers will deploy a miraculous plan of action to meet the expectations of the public.