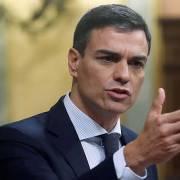 Fernando González Urbaneja | Disordered thin­king is one of the cha­rac­te­ris­tics of the Prime Minister. It is not ne­ces­sa­rily a mis­take, since this di­sorder makes it ea­sier for him to adapt to reality, to change his cri­teria in ac­cor­dance with the Marxian prin­ciple that these are my prin­ci­ples but if I have to change them…. The li­be­ra­lity with which Sánchez handles facts, data and sta­tis­tics is as­to­nis­hing. For exam­ple, he ar­gues that the per­for­mance of the Spanish eco­nomy is the best in Europe based on a spe­cific sta­tistic (the growth es­ti­ma­te), omit­ting the fact that the re­co­very over the last four years is the wea­kest in the re­gion.

An academic examination of all the statements he made in his long speeches in the Senate on Tuesday would produce a bleak result, the footnotes, the additional considerations to qualify his theses would fill many pages. The self-confidence and self-esteem of the character is astonishing. The naturalness with which he elevates to principles and success what is no more than an improbable indication is astonishing.

For example, on Tuesday he argued that those sectors subject to administrative control, to intervention (energy and housing) are the ones that have moderated prices, and those that are not (food) are the protagonists of the rise in the CPI: It takes courage (or nerve) to make such an assertion.

The case of housing is striking. It is true that different administrations are trying to intervene in the sector, especially in the rental segment, with mandatory rules to maintain prices. The freezing of rents in Barcelona has been regulated for a couple of years now. The reality is that it is not working, rents continue to rise at considerable rates with the aggravating factor: there is no supply, around 20% of the supply existing before the controls has been withdrawn. And the possible entry into force of this new housing law, which is being debated with parsimony in Congress, has contributed to shrinking the market and reducing supply before it comes into force.

There is only one effective measure against the escalation of housing prices, whether for sale or rent, and that is to increase supply. Public and private. Build on public initiative or with incentives for private initiative. Do not discourage owners and investors in rental housing. Just the opposite of what is the norm.

An interesting event this week was Sánchez’s appearance this week when he took part in the signing of one of the first steps to unblock the so-called Campamento operation, which opens the way to build more than 12,000 homes in a Madrid neighbourhood. After decades of paralysis and bureaucratic bureaucracy, the Ministry of Defence transferred to the Ministry of Transport/Housing the land where the regional and local administrations must authorise public and private real estate development in order to increase the supply.

Expanding supply, facilitating it, is the only effective policy for tackling the problem of housing shortages and rising housing prices. It is not solved by controlling, intervening, or pushing around, but by facilitating and stimulating. Campamento is a good thing, although it is late. Now all that is missing is housing, and that takes time and paperwork.