Emma Fernández, board member of Metrovacesa

“Spain Has Not Had An Industrial Policy In The Last 20 Years, Maybe More” 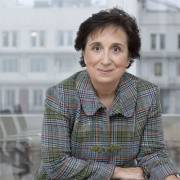 Fernando Rodríguez | “Tourism, energy, foo­d…In those sec­tors where we have people with a lot of know­ledge and we are lea­ders, we should take ad­van­tage of re­co­very funds and for sus­tai­na­bi­lity and in­vest in tech­no­lo­gies to be stronger and more com­pe­ti­tive. I think it is very dif­fi­cult to trans­form a so­ciety from one day to the next and create com­pa­nies that ge­ne­rate em­ploy­ment in sec­tors com­ple­tely new. Our trans­for­ma­tion must be gra­dual. We must take ad­van­tage of European funds to make an in­te­lli­gent change of our strengths”, says Emma Fernández, board member of Metrovacesa, Asti and Axway.

Better than we expected, although the pandemic has also revealed the gap between small and medium-sized companies and large corporations. The telecommunications infrastructure has worked extremely well: traffic has increased by 40 percent and the network has not suffered. The infrastructures have been efficient and the big companies already had the applications to organize remote work. For small firms it was different. The effort has been greater, but visible. Many catering businesses, for example, have implemented QR codes for menus, so the majority of society has adapted well.

The tourism or hotel and catering industry suffer a lot, and not so much, for example, the technology industry.

Spain has a clear technology deficit. But the leading technology companies are no longer in Europe, in particular those involved in digitization, which are more in North America or in Asia. In fact, the dispute between the US and China has a lot to do with digital leadership, and Europe, just as it was once a leader in the technology segment, for example in mobile telephony, now lags behind in areas such as artificial intelligence or cloud technology. In Spain, we are also below the average and this has meant that our companies are more in the service sector than in the industrial sector. The pandemic has attacked services, which are the heart of this country, but there has never been so much talk about science, technology and digitalization as in the last year. You and I wouldn’t be doing this meeting for Teams right now…

What innovation and technology drivers should be boosted now? It seems that industry is not of much interest in Spain.

Spain has more industry than we think we know and we have many leaders in the automotive industry and its components -Gestamp, Antolin-, in logistics and retail -Inditex-, a public administration with a health system that is not bad … We have many elements showing that we can compete in areas of complex technology and with a global vocation. However, it is true that our business system, with the exception of certain regions with machine tool industries and other powerful ones, is based on small companies. This is a symptom of the fact that there is not enough entrepreneurial culture and that education lacks the technological and management component that is needed for growth. And there is also a deficit in digital skills in companies, so we should assume the obligation to train our professionals in these technologies of the future. There is a clear opportunity to incorporate these technologies into the different sectors where we are present.

How do you see industrial and technology policy in Spain?

I think that Spain has not had what is known as industrial policy in the last twenty years. Or maybe longer. We have tools that finance R&D and make it possible to carry out many innovative projects, and there are many examples. But when we talk about industrial policy, in the modern sense of Mazucatto, that is, describing the policy of objectives with which the country defines where it wants to be in the long term, there is not much consensus and there is not enough discussion. In order to have a long-term vision, it is necessary to compare many ideas and define how we want our society to be in the future.

And where should we go or, in other words, in which areas are we most competitive in order to take advantage of it in the technological field?

Tourism, which is having problems at the moment, is a sector of great interest for our country. In those sectors where we have people with a lot of knowledge and we are leaders, we should take advantage of recovery funds and for sustainability and invest in technologies to be stronger and more competitive. I think it is very difficult to transform a society from one day to the next and create companies that generate employment in sectors completely new. Our transformation must be gradual. And we must take advantage of European funds to make an intelligent change of our strengths. This is the greatest difficulty, to turn these sectors towards sustainability: energy, health, transport, public administration, tourism, agriculture, food and its related industries.

Fernando Rodríguez Fernando Rodriguez is in charge of PR and Development at The Corner. He has worked for over 30 years for financial publications like Expansion, El Economista, Dossier Empresarial, Ciudadano and Afa Press-Worldfolio and has been a contributor to El Pais-Negocios, Emprendedores, Época, Sector Ejecutivo and Consejeros. Fernando holds a degree in Journalism from CEU-San Pablo (Complutense University) and a master’s degree in Strategic Communication from CESMA business school. As a communication consultant, he has developed PR projects for firms like Grupo Bancaja, JP Morgan, GBS, Corpfin, QBE, Howden, Asociación Española de Leasing y Renting (AELR) or Asociación Española de Accionistas Minoritarios de Empresas Cotizadas (AEMEC).