Flexibility and proac­ti­vity of BCE 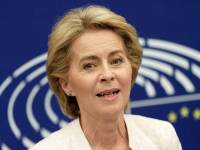 POSTED BY: THE CORNER 24TH JUNE 2020.- Apolline Menut (AXA Investment) | The fle­xi­bi­lity and proac­ti­vity of the European Central Bank (ECB) since the be­gin­ning of the COVID-19 crisis has been a po­si­tive sur­prise. Generous li­qui­dity mea­su­res, ea­sier co­lla­teral re­qui­re­ments, in­creases in asset pur­chases pro­grammes and the crea­tion of the Pandemic Emergency Purchase Programme, have helped the ECB main­tain smooth credit flow to the pri­vate sec­tor, sta­bi­lise mar­kets and re­duce frag­men­ta­tion risks.

• The Next Generation EU package is also a genuine step forward. Joint debt issuance, fiscal transfers and proposed joint tax revenues are politically meaningful. But the package is too small (around 5% of EU GDP) and slow (peaking in 2023-2024) to be a proper cyclicalstabilisation tool.

• Overall, we expect fiscal stimulus of around 4% for the Eurozone this year, far from the 9% needed to offset the COVID-19 induced permanent income loss.

Our euro area growth forecast sees GDP contracting by 7.1% yoy in 2020, before rebounding by 5.9% in 2021. This means that GDP in the fourth quarter of 2021 will be 4% lower than it would have been without COVID-19. On the way we would have lost 6% of cumulative GDP. This calls for massive fiscal stimulus. Indeed, fiscal multipliers – i.e. the growth return for every 1% of GDP of discretionary easing – are assumed to be around 0.7 and would imply that a fiscal impulse of about 9% of GDP is needed to offset permanent income loss. We are far from there.

Most euro area countries’ fiscal responses were announced during the early phase of the COVID-19 crisis from March to the beginning of April and focused on emergency support measures.

At that time, governments opted for a broadly similar mix of policies, including support for job and income losses (mainly through enhanced short-time working schemes), support to corporates via liquidity measures (credit lines, state guarantees programmes) and some boost to health expenditures.

But the sizes of the national fiscal packages differed – at the end of March, the €25bn “Cura Italia” decree (1.2% of GDP) paled in comparison to the German €156bn (4.7% of GDP) supplementary budget. Further fiscal support has been announced since then, but asymmetries in terms of size have not been corrected, while fresh asymmetries around composition have emerged.

We estimate that euro area discretionary stimulus (excluding automatic stabilisers and liquidity support measures) is close to 4% of GDP – well below the required 9% we mentioned above – and ranges from about 3% of GDP in France and Spain to 4.5% in Italy and Germany.

But the later number should be put into perspective: Italian growth is expected to tumble by 9.3%yoy in 2020, but the German contraction in GDP is expected to ‘only’ be 5.2% lower. Fiscal support in Italy should thus be much higher than in Germany.